The Northwest Coin Club’s 2016 annual dinner was held on October 13th at Chino Latino in the uptown area of Minneapolis. A good crowd gathered this evening to enjoy fine food and the fine company of some of the most knowledgable numismatists in the Twin Cities area! Though our Club President was unable to attend due to illness, our wonderful Vice President along with our dedicated Secretary stepped in to address the club. They did an outstanding and memorable job of reviewing the club’s activities this year as well as thanking the many members who go above and beyond to contribute to our continued success as a club.

During the review, a very special honor was bestowed upon long time club member and Club Historian Pete Smith. He was presented with the ANA Glenn Smedley Memorial Award for outstanding and dedicated service to the hobby of numismatics. The Glenn Smedley Memorial Award was created in memory of Glenn B. Smedley, a collector’s collector, to recognize individuals who have devoted their efforts to the betterment of the American Numismatic Association. Congratulations Pete! https://www.money.org/service-award-winners-2016 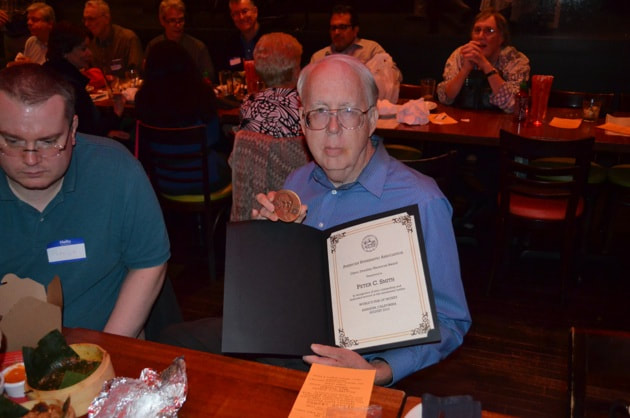 The Northwest Coin Club’s Annual dinner was held on October 15th and was deemed a success. Thirty-two people were at the dinner which was a Mexican Buffet. The food was called tasty by some and the restaurant was nice for the dinner. Having a separate room was exactly what was needed to have a quiet dinner and the staff was right on the ball taking care of all the tables. Many of our older members can’t handle spicy foods which could account for fewer people, than normal, in attendance.
THURSDAY OCT 16TH, 2014 GRANITE CITY FOOD & BREWERY ST. LOUIS PARK

Our 2014 annual club dinner was held at Granite City Food & Brewery in St. Louis Park on October 16th. This was another new venue for the club and we had a decent turnout of 44 members and guests attending. Social hour was from 5 to 6pm followed by dinner from 6 to 8pm. The meals were enjoyable but the atmosphere may have been a bit louder than we’ve been used to in the past. Much thanks to Ricardo for his hard work in procuring the space and especially for the NWCC themed cake!